17th May – International day against LGTBIQ+phobia in Sofia 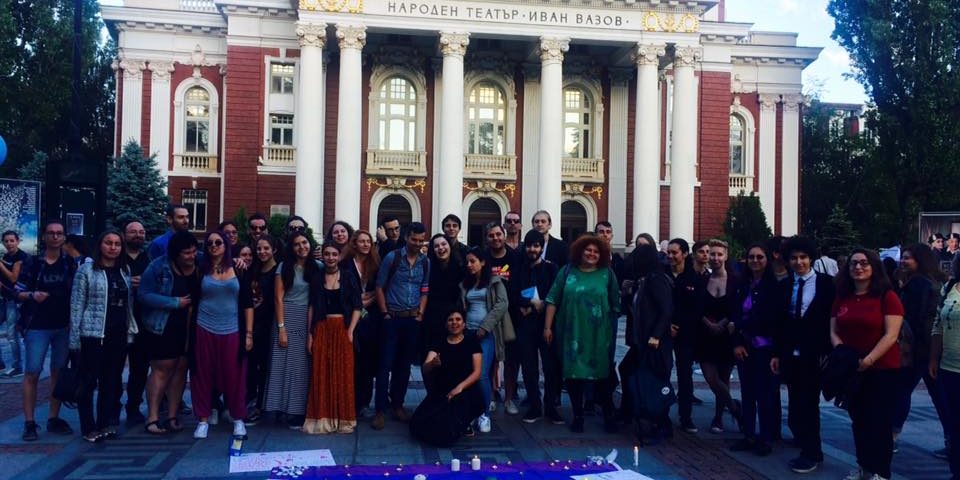 The evening of 17th May a rainbow flag laid in front of the National Theatre Ivan Vazov. Bulgarians and foreigners from Russia, Estonia, Spain and other countries gathered for the second time to show support for all those who suffer discrimination every day for belonging to the LGTBIQ+ community. The organisation Deystvie made the call for the gathering. Different activists, volunteers and supporters turned up on time to stand against homophobia, transphobia, biphobia and all kind of discrimination based on sexual orientation and gender identity.

Soon the organizers asked the people to make a circle. The park was crowded with young people so that speaking up loud was crucial. “Why are we here?” Asked one of the activists taking a step forward. He explained what this day means to him, a question he invited us all to answer. Around 35 people took a step forward to disclose why this day is so important. One reason was to show visibility: the LGTBIQ+ community has had the necessity to hide for a long time and this is a day to show in a public space, with a big rainbow flag, that we are here to stay. But what about the ones that are too scared to appear, those who stayed home out of fear? There were words for these people too: “You are not alone”.  Activists from Russia were also part of the event and shared their emotion to be present on this day since in their country an act such as that one was not possible. But not only LGBTIQ+ people showed up, a heterosexual woman claimed loudly she was there to show allyship to achieve the end of discrimination and violence. The crowd gave her a warm applause.

This gathering was meant to show that together we are strong and that if you are scared and you suffer LGTBIQphobia you have a community to turn to, someone that will understand and be there for you. Further, this gathering was also firm opposition to oppression and discrimination of any kind, a way to defy fear.

Finally, candles were lit and put on the ground for the victims of hate as a symbol of hope and union. Kind supportive messages were written for the part of the community that was not there out of fear, all with one clear message: we have your backs.