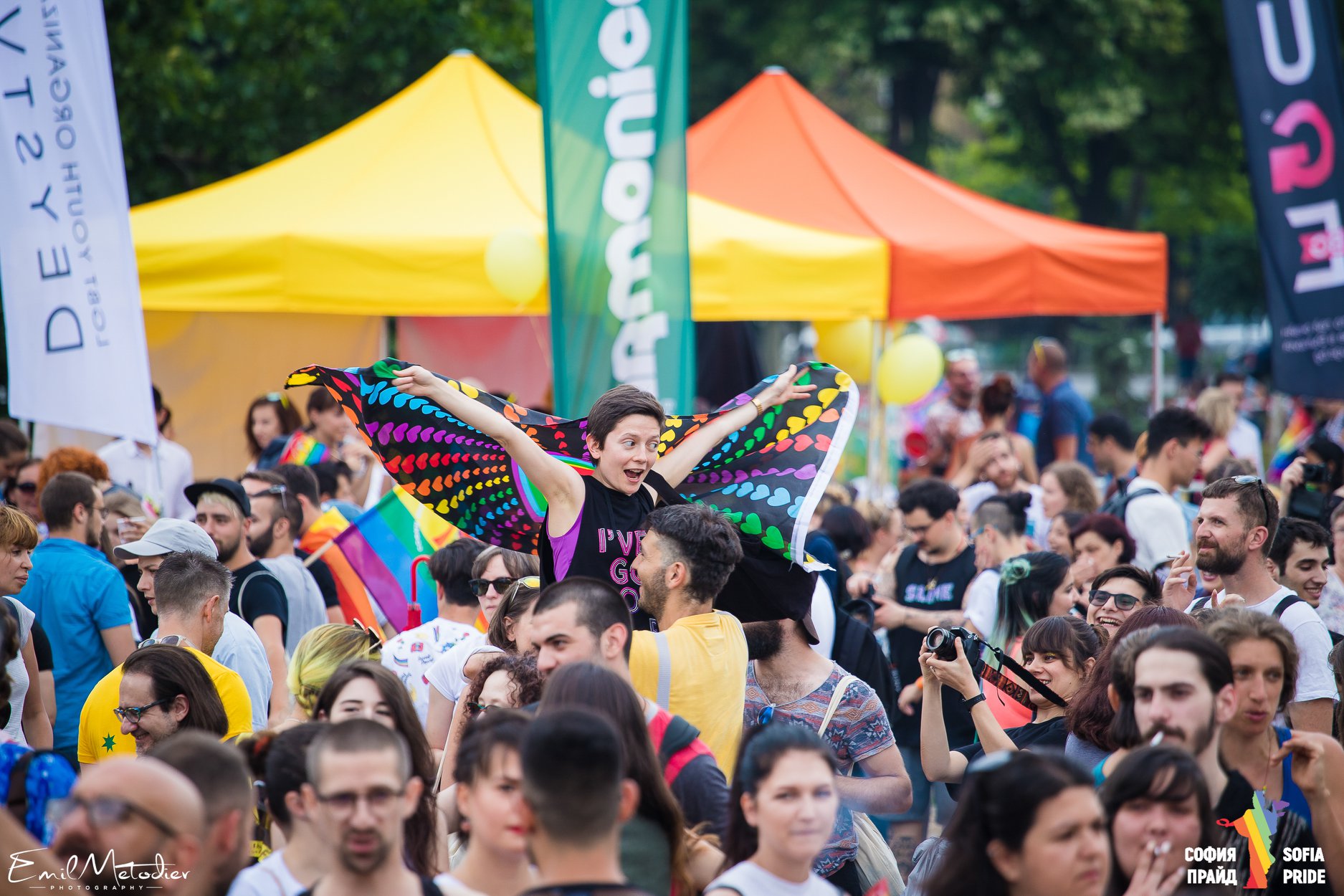 In preparation of Sofia Pride 2018, the Pride Organizing Committee held very promising talks with the Mayor of Sofia Ms Yordanka Fandakova who committed to providing financial support to the Arts the Sports events for the first time. The Sofia Pride team is very proud of this successful first step in building fruitful long-term collaboration with Sofia Municipality and is hopeful that in the upcoming years the city of Sofia will gain a bigger and bigger role in supporting the organization of Sofia Pride. In 2018, for the first time a major Bulgarian company supported Sofia Pride both publicly and financially! Walltopia is the world leader in climbing wall design and manufacturing with more than 1800 projects worldwide. In the week before June 9, Walltopia hang a 21-meter rainbow flag on the fasade wall of its building in Sofia Tech Park in solidarity with the LGBTI people and their fight for equal rights! “I realized that they felt unaccepted and because of their difficult situation they are trying to find their own happiness. That’s why we decided to support Sofia Pride – people should not be afraid to be themselves no matter what”, said Ivaylo Penchev, executive director of Walltopia. This year, H&M, Europe’s largest sales network, joined the Global Pride Movement with a new collection called Love For All! 10% of the sale price of Love For All products will be donated to the global campaign Free & Equal organized by the United Nations Commission on Human Rights to build a better world in which sexual orientation and gender identity is not a cause for fear. At the local level, H&M Bulgaria joined the local pride initiatives for the first time, supporting the event with a special showcase at the brand store on 6 Vitosha Blvd in Sofia. As always, Sofia Pride was preceded by the traditional Sofia Pride Arts and Sofia Pride Film Fest, which have been taking place in the week preceding the Pride Day since 2012. For the first time this year the program of supporting events lasted for a whole month! Starting on May 12, this year’s cultural program offered a variety of exhibitions, theatrical workshop, contemporary dance and performance from Bulgaria and around the world, literature club, PRIDExPOWER film development workshop for queer short projects from the Balkans and a selection of the latest movies on the topic of LGBTI from the world cinema. This year Sofia Pride expanded its program of thematic events by adding Sofia Pride Sports! The first edition of Sofia Pride Sports consisted of 6 sports events, including football tournament, workshops on voguing, bachata sensual, mobility, martial arts and self-defense, and the first Equality Run in Sofia! The running pairs had their hands tied to each other and the cause of the Equality run was to give courage to HIV-positive people and to also raise awareness regarding HIV and AIDS. During the event the sexual health center ,,CheckPoint Sofia I’’ was kindly offering an anonymous and free testing for HIV on the spot. The Equality Run was funded by the Sofia Municipality Program for Development of Physical Education. Another innovation was the festival atmosphere offered for all guests of the Pride Day! From 4 pm until the beginning of the street March at 7 pm at the gathering point in front of the Monument of the Soviet Army, there was a variety of attractions to attend – information booths with materials and merchandise of the LGBTI organizations, make-up station, photo-booth, messages station, beverages limited edition products of the businesses who support Pride and various other attractions. A number of companies and businesses attended Pride with their own stands –  Harmonica, Roobar, Haniel Bio, Trastena, Power Pops, EY Careers,  Black Flamingo Publishing, Kiflab gourmet cosmetics, Baba’s Soapery, free and anonymous HIV testing provided by CheckPoint Sofia I Център за сексуално здраве, Ailyak Beer, Single Step, POSH Kisses and Sweets. The festival atmosphere was highlighted by the participation of Ruth Koleva, Ivo Dimchev, Mihaela Fileva, Dancing Sofia, Yambadon, Spice Girls Tribute, Jennifer Benediction and Head Man’s Hat Live who performed on the Pride stage. A record number of 24 Diplomatic Missions and three international organizations signed a Statement of Support to Sofia Pride 2018! “We reject and condemn any discrimination on those grounds, which is incompatible with the provisions of the relevant legal texts within the United Nations, the Council of Europe, and the EU. By signing this statement, we encourage everybody to take this opportunity to support and defend these values and to join the Sofia Pride March to embrace LGBTI people as equal citizens, without prejudice or discrimination, and to promote LGBTI equality”, states the document which was read during Sofia Pride in the presence of many of the Ambassadors who signed it on the stage.